That's for sure! I'm talking about the June Kit of the Month, baby! This kit is SO perfect in every way:) I've never been so inspired to create than I am with this kit! I made FOUR cards for today's HIP HOP! w00t!!!!!!!!!!!
So since I have so many to show, I'm gonna cut the chit chat short *you're welcome*, ha! 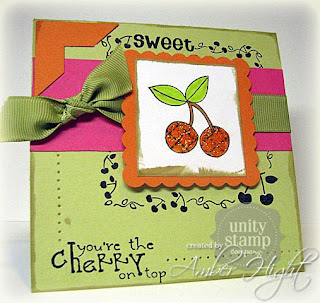 This card uses the cherries, "sweet" frame, and sentiment from the June KOM. I was a little heavy-handed with the distressing ink pads (PTI) but it's all good:D 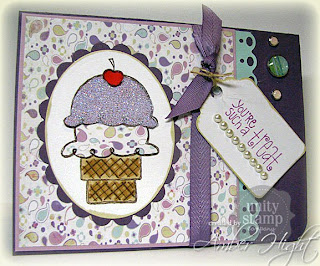 This card uses the ice cream cone and sentiment from the June KOM. I printed off that patterned paper from the digi kit called "Orchard" from Two Peas in a Bucket. I paper-pieced the ice-cream cone and sprinkled some glitter on the top scoop! 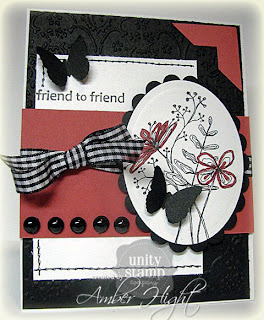 This card is for Jeanne's Hip Hop Color Challenge, Red-White-and Black! Again, all stamps are from the June KOM (I'm telling you, this kit is so versatile!) I've used this layout on a card before and I just love it! I'll probably use it even more, lol! 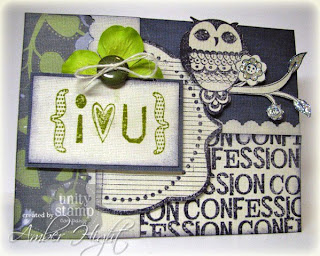 Okay, this is the last one! I made this one for Jeanne's "Unity has so much to say" challenge. The challenge was to use a sentiment stamp to create a background! The "Confession" sentiment comes from "Confession: I {luv} Unity"! The owl and branch are from the June KOM and the I heart U sentiment comes from the August 08 KOM. The paper I used is from the Latte stack by DCWV. I also used some gold ice stickles on the flowers/leaves (cuz all my cards need a LITTLE bling AT LEAST!)
I guess you've probably heard the news by now! Angela invited Kimber and Julie to be permanent DT members! I am super excited about this because they are both so sweet and talented! A really nice addition to the team! Also, the THREE June Guest Designers are Michelle Woerner (LOVE HER!), Gina Hanson (wow, SO talented!), and Candace Harrison! Candace won the May KOM Challenge and won this spot on the team, she's so amazing!
Alright, well now that I talked your ear off, it's time to hop on over to the lovely ***Jen Buck!*** Enjoy your HIP HOP!!!!!!!

WoW these are all great!!

Girl! Look at you over-achieving in a HUGE way! These are all so absolutely gorgeous, but that last one is my favorite. I may have to scraplift it for when DH is deployed! smiles...

wow! what a smashng collection!

ooo Amber these are awesome! You did a wonderful job! I especially love the soft purple on that ice cream one! :)

wow lots of yummy goodness here to look at.

Neat cards and I love the glittery ice cream! Great BG too!

I love all your cards Amber! You were busy this week!

Amber, your cards are all amazing!!!

Amber these are all gorgeous!

You've been busy, Amber!! You should be busy more often! Love the cards!

Love all of these beautiful cards! Hugs!

These are great! What fun!

Love them all amber!!! Gorgeous!!

Love all the cards. So colorful.

I love the color combos you use. You designs are awesome !

Love your cards! I like the photo type corner on the first one, cute! Great job!

Wowzers!!! Great collection!!! All of these are super fabulous! Sooo inspiring! :)Cheri

WOW! Thanks for all the inspiration!
Sandra

These are amazing Amber! Your talent is overwhelming! :D (In a good way!) Thanks so much for enabling me!

Fabulous and inspiring cards. I just love your take on the challenges.

The purple is really cute.... but I love purple he he! hotwheels

Holy Buckets! You did get busy with this new kit! Cute work!

WOW! All so marvelous!

Each one of your cards is amazing. And they are all so very different. Great job.

Oh, I love everything you made!!

Oooh! I love all of these, but especially the sparkly orange cherries! CUTE!