Where does the time go?

I can't believe it's been so long since I blogged! Well I'm still in Montana, for one more week! Actually, I leave on Thursday and I'm so excited to get home and see my babies!!! Everytime I see a dog I almost cry for how much I miss mine, lol! And even better than that is that I have one month left till my honey gets home! Actually, 4 weeks sounds better, doesn't it? I wish I had something fun to share but I don't, lol! Here's a picture of me and a couple cousins from Thanksgiving day yesterday! They're in high school now (the one next to me actually graduates this year!) and I can hardly believe how much they've grown since I last saw them! Dang! Anyhoo, just letting you know I'm still alive and will soon be home and stamping again, yeah!
Oh, I got an iPod today too! It's the only thing I bought for me today durng the black friday madness so that's not too bad. Usually, black friday shopping is ALL ABOUT ME!! lol! I'm so excited to get the big one, I can watch Pushing Daisies now! I could watch it on my laptop I guess, but it's funner on my iPod, bwahahaha! 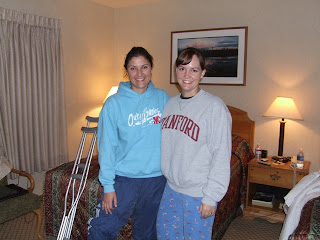 That Christy and I really are friends, lol! We've known eachother for over a year now and still hadn't had any pictures together! So my mom snapped this one of us a couple nights ago! Note Christy's awesome Grumpy pj pants, love them! She was going to photo shop them out of this picture but luckily she changed her mind, they're cute:)
So we have been doing LOTS of shopping lately! AND EATING! OMG! I feel like such a cow but we have to take one for the team since we don't have all these yummy restaraunts at home in Oki. I think Quizno's is on the menu for tonite, after we hit the big mall in SeaTac! We went to teh Tacoma mall last night and poor Christy pushed me in the wheel chair all through the mall, what a great friend, huh?:) We saw some Twilight tshirts at Hot Topic but they were a little more money than we were wanting to spend so we're gonna keep lookin!
My ankle is starting to heal up cause it itches every once in awhile. It doesn't really hurt too much during teh day unless I've been standing up for too long. The blood finds a way to pool in my ankle and then my foot feels like its going to explode, fund stuff, eh?:) Sorry if that's TMI but I thought since you're all my friends you'd like to share in the pain, bwahaha! I still have to take medicine at night but usually only take one or two during the day so that should tell you how much better I'm doing! Before, I was taking 2 every 4 hours ON THE DOT! Seriously, I'd watch the clock and wait for it to be four hours so I could take more, lol:) That explains why I slept so much the first few days!
Well hopefully ya'll are having a great Friday! Check in the Verve Forums because they're having a release party on Sunday night and the release on Monday, 6 new sets that are SO FAB! I'm so jealous I can't join in on the fun, my poor Verve stamps are lonely and sitting in the PO waiting for me to come back home! I am going through some serious withdrawals! You can also check out the Verve blog for Sneak Peaks every day until the release! If you're feelin sketchy, Julee is having another fun Sketch Blitz in the forum, HERE.
Have a great afternoon:)